Hello Everyone! I am so happy to finally be able to release this episode for viewing! It took nearly two years and over $25,000 to produce, but after loads of time, hard work and patience, I am thrilled with the results. I want to personally give a shout out to Jeff Cindric @KeystonePictures for his phenomenal work as editor. We spent nearly a year working almost daily on this project, so I want to thank him for putting up with me. 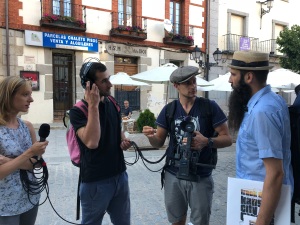 I also want to thank Holly Renaut for all her continued work on voiceovers. Her beautiful, professional voice helped pulled the storyline together and “fix” some of the things we made during production (Oops!)

Lastly, I want to give a huge kiss on the lips to my wonderful husband Doug ( @gooddougesq ) for his undying support and for pushing me when I almost gave up. Trust me, this was no easy task!

American Uproot was my first attempt at writing, producing and directing a travel video (er, any video!) and I still have DREAMS of producing more episodes, here and abroad. But there’s a pesky little thing called funding that needs to happen! So, if you have a heart and love what you see and would like more, please make a contribution!

Lastly, lastly, the credits roll at the end of the episode, but I really want to give a shout out here for all who worked to make this happen! Thank again and you can view FULL EPISODE HERE ON YOUTUBE

Ryan and Laura at The Toast Café thetoastcafe.es

American Uproot is a creation of Ambos Mundos, LLC 2018